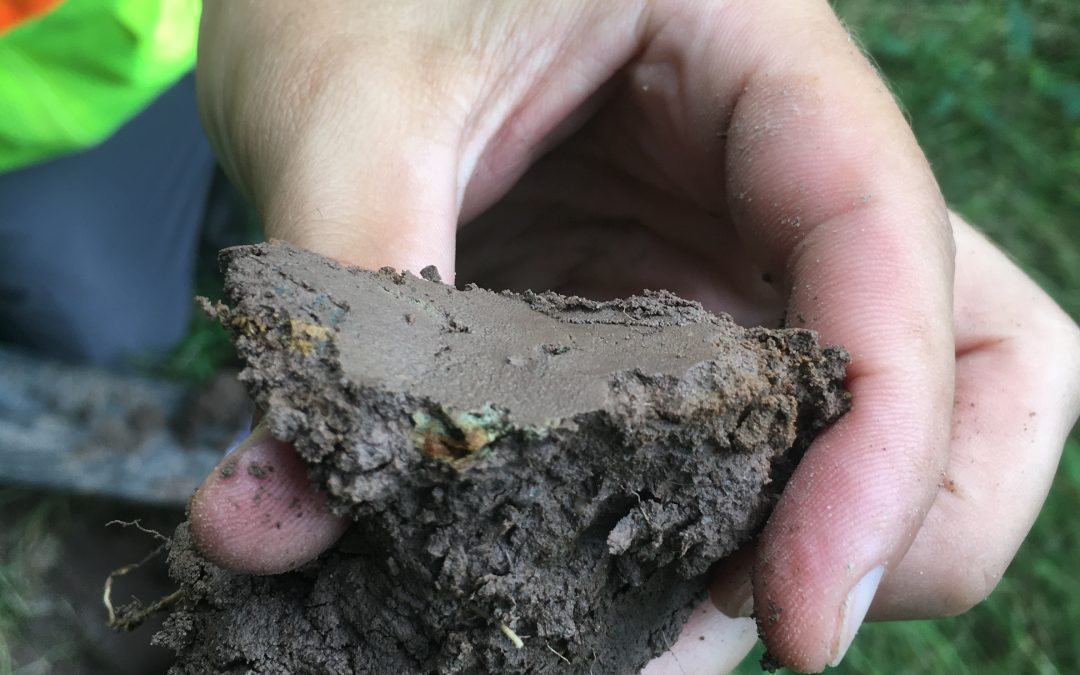 Mapping wetlands in accordance with the US Army Corps of Engineers standards requires of evaluation of three things: wetland hydrology, wetland plants, and wetland soils. Typically, that requires standing in the field with a shovel or a soil auger, and marking the approximate boundary where the ground transitions from meeting criteria for “wetland” to a drier “upland”. Flagging wetland boundaries is a niche skill set and is the purview of a small cadre of highly trained field experts.  Because of its manually intensive nature requiring skilled professionals to physically visit and walk each site, the process can be somewhat expensive and time consuming. To be clear, that is NOT what we are talking about here. We’re talking about taking that wetlands scientist and virtually suspending them hundreds of feet in the air whilst downloading their brains into a computer to create objective rules to map wetlands over large areas. But more on that in a bit.

The process can be somewhat expensive and time consuming. To be clear, that is NOT what we are talking about.

The significance of wetland mapping has evolved over recent decades and continues to be of controversy with respect to regulatory requirements for land use. Proposed updated federal regulations have been stalled in the courts and under revision for years. Meanwhile, landowners are left with the same batch of questions: Do I need a permit? Can I fill, dig, or drill? What is the NEPA/SEQRA due diligence requirement for me to identify and avoid wetlands? For many, even the mention of possible wetlands on a property sends up a collective groan of bureaucratic anticipation, cost, and delays.

But there is another emerging and growing body of interest in identifying and accurately mapping wetlands. It has to do with community resiliency and valuing the services provided by these complex ecosystems. Reduced flooding. Improved water quality. MS4 compliance. Reduced drinking water filtration costs. Increased biodiversity. Increased resilience to extreme weather events. Better hunting. Better fishing. Enhancement of community character and livability. Wetlands are increasingly being viewed as community assets, not as marginal, useless or unproductive lands. For that reason, interest in mapping wetlands (and related systems like vernal pools) at the community level is growing. And that’s where geospatial technologies and remote sensing take center stage.

Interest in mapping wetlands at the community level is growing, and that’s where geospatial technologies take center stage.

The National Wetlands Inventory (NWI) has been around for quite some time as the de-facto gold standard for initial screening or reconnaissance level mapping of wetlands at the national scale. Its widely understood NOT as a replacement for the kind of detailed field work described above, but as a tool to help recognize the possible existence of wetlands based largely on photo-interpretation. By providing a consistent data model with published standards, the NWI has become a ubiquitous GIS layer in most environmental applications and community Natural Resource Inventories (NRI), alongside layers like FEMA floodplain maps and USGS Hydrography (stream) data. Designed for use at 1:24,000 scale, anyone who has brought NWI GIS data into a digital map will likely zoom in well beyond that scale. And when you do that, its pretty easy to start picking out obvious inconsistencies with things like recent aerial imagery or even LIDAR.  Wetlands data may be 10 years or more out of sync with recent imagery, and don’t even get me started on the scale issue.

So, what to do if the NWI data looks a bit wonky in some places when trying to use it at community or watershed scales, while also wanting wetland data to align with other publicly available, high resolution GIS data?

What to do if the NWI data look a bit wonky, but you need wetland data of high resolution and detail?

As such, GroundPoint engaged in a partnership with the University of Vermont Spatial Analysis Laboratory (UVM-SAL) and Quantum Spatial, Inc. to implement techniques using publicly available LiDAR and 4-band imagery (both leaf off and leaf on) to map wetlands at local scales (i.e., 1:2000 or 1”=200’) and update the 1:24,000 scale NWI. Now applying the approach to the entire 2500 square mile area of the New York City Watersheds, the results extend well beyond what the core NWI provides and will allow NYC wetland managers to identify a significant number of forested wetlands and potential wetland complexes that they would have otherwise been unable to account for.

The USFWS office responsible for maintaining the national database on wetlands has published detailed standards and guidelines on mapping wetlands using aerial imagery and photogrammetry but adapting those standards to now include high resolution topography derived from LiDAR is still a relatively new process. Using a process called image segmentation and object- based image analysis, pioneers in mapping wetlands from remote sensing data at Ducks Unlimited and the UVM-SAL have been refining high resolution remote sensing techniques and applying them to large area mapping projects from Minnesota and the Great Lakes to Pennsylvania and Vermont.

One unique element to the NYCDEP approach with GroundPoint is the integration of local resolution elevation derived hydrography. Reconciling water features from the USGS hydrography dataset with the new USFWS approved NWI dataset is a unique opportunity that will hope to inform updates in both programs in the future. In addition, by reconciling the two datasets at the same time and at the same scale, we are able to more effectively evaluate isolated wetlands to determine if there is, in fact, a hydrologic connection between wetlands and nearby streams.

Now you can get me started on the scale issue. As it turns out (cue choirs of angels and beams of light), scale is a huge factor in mapping. It may seem like a no brainer, but we MUST be very clear about scale when both producing and using geospatial data. We’ve seen evidence that mapping hydrography at larger scales in Pennsylvania (for example) has resulted in increasing the mapped stream miles by as much as 3 times (See Fractals 101), and initial studies in the NYC Watershed showed that as many as 80% of previously “isolated” wetlands (with no hydrologic connection and hence no regulatory protection) are not actually “isolated”, but actually do have mappable hydrologic connections to nearby streams.

High resolution mapping from remote sensing is moving to center stage. Where imagery acquisition and LiDAR collection programs have been the main spotlight focus in the past, now they are more clearly part of the supporting cast.

The impact of all this is that high resolution mapping and remote sensing are moving to center stage. Where imagery acquisition and LiDAR collection programs have been the main focus in the past, now they are more clearly the supporting cast. Deriving critical data like wetlands, streams, impervious surfaces and land cover at high resolution and with defined scales will become the new gold standard for mapping in 2020 and beyond.

Benjamin Houston is a licensed professional engineer in New York and the founding officer of GroundPoint Engineering, a federal and NYS certified SDVOB firm.